All or Nothing - Incredible Success Story of Ashley Revell

Ashley Revell is one of the most famous gamblers, because his entire assets on the spin of a roulette wheel. All paid off and this is his success story.

Ashley Revell's game is one of the most extraordinary stories in the gambling world. The Ashley Revell story starts during 2004 in an English pub of all places. A friend said to Ashley; “Wouldn’t it be great if we went to Las Vegas and bet everything on one spin”. As the drinks flowed the conversations continued and it seemed like a great idea. The idea of doubling your wager on a red/black roulette spin would be a life changing experience, one way or the other.

The next day Ashley Revell started becoming obsessed with the idea to play real money at the Las Vegas's casino. In the fore-front of his mind was the fact that you can beat the odds. With a single 50/50 Red/Black bet on the Roulette table there are only two possible outcomes, win or lose. One devastating, the other euphoric.

Ashley Revell start liquidating his assets into cash. He did not own a house but he did have saving and other assets. All his worldly possessions were cashed in to create a pot of $135,000 Sterling. He set off for Las Vegas the US gambling Mecca with a hired tuxedo to follow his dream. By this time he had attracted a bit of publicity and Sky Television were following the story.

Ashley Revell wired all the money to the real money casino at Las Vegas and Hotel Plaza where this amazing event was scheduled to take place.

He lost a few dollars playing poker, before heading for the roulette wheel with $135,000 to play. He was planning to put everything on the black, but switched to red at the last minute for some reason he never fully figured out. The ball stopped on red seven. Ashley's win was now worth $270,000. 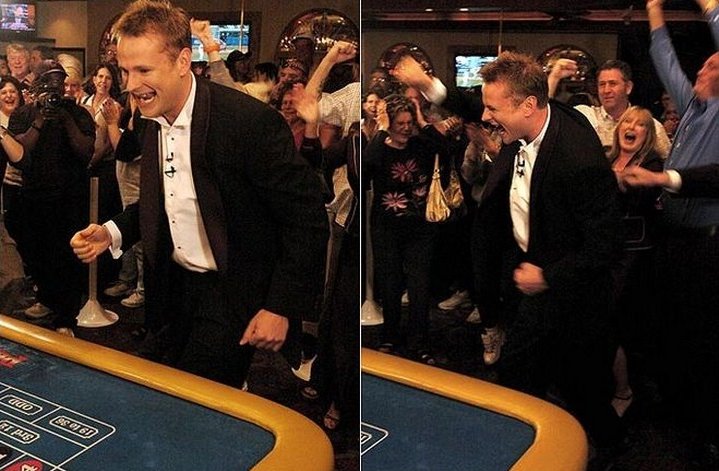 Of course the gathering crowd for this spectacle were now cheering and the champagne was soon flowing. Potentially, Ashley had sacrificed everything he owned with a chance to double his money. He walked away with $270,000 after a wild celebration, well deserved.

Ashley Revell changed the course of his life on a single spin of the Roulette wheel. After a motorcycle trip around Holland he met a girl, took her back to England and married her. They now have two children and Ashley says he values the sentimental things most in his life.

Today, Ashley Revell runs his own successful online poker company, something he probably would not have done without taking the gamble. Perhaps he should be credited with the title of the most extraordinary gambler of all time.

Ashley Revell is a vivid example and proof that in to the casino you can win real money. But if you are not crazy to sell all your property and go to Las Vegas casino to play for all your money, we suggest you start to play at online casino for free for real money, without leaving your cozy home. Best online casinos offer no deposit bonuses for their new players, so gamblers can test the most popular table games and video slot games, without spending a single cent.