2017 Looks Bad for Macau:
Bitcoin Up vs Yuan Down 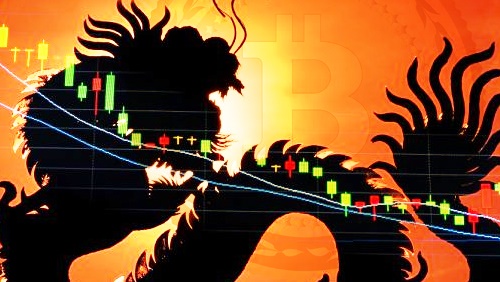 The tepid 2016 Macau recovery may have topped on December 8th. It was earlier this month that Beijing decided to go after the Macau mass market on top of already practically destroying the VIP market, this by limiting ATM withdrawals by half. Not surprising that the Macau stock that was hurt most by this move was Melco Crown which has put its focus on the mass market. Melco dove 20% that day.

Bitcoin Up, Yuan Down, 2017 Looks Bad for MacauFor investors that have come to terms with Chinese government mentality and have been generally aware of the war against cash by governments globally, it isn’t surprising. The more monetary pressure that gets piled on to China (the Yuan is down 7% this year and 12.5% since the Macau top), the more destructive Beijing’s economic policies will tend to become. The government will get defensive and more desperate, blaming all problems on the looseness of free markets when all of it can be blamed literally on the exact opposite.

We’re seeing the chaos unfold in India with the Indian government’s decision to demonetize its largest bills. We’re seeing it in Venezuela where an attempt to do the same led to riots in the streets. We’ll see it in China too, eventually.

Granted, the defensive response to economic and monetary stress is not unique to the Chinese government specifically. It in fact exists across all governments all around the world. All governments without exception come to power with centralized plans of varying degrees. When they all inevitably fail, the blame is placed on the people who are not following The Plan.

Regulations get stricter, taxes get more onerous, capital and price controls get put in place in an attempt to make The Plan work, and business and human life in general suffers. The cycle continues until things get so bad that The Plan is inevitably abandoned and liberty makes a comeback.

What singles out China in this regard is the extremes to which its government, ever since Mao, has been willing to go to try to force its next Big Plan before abandoning it. Relatively tame governments like that of the United States (at least tame domestically) and Europe will try price controls and capital controls and trade tariffs for a while as happened in the 1970’s, but not much more than that before seeing none of it works. Historically for China though, the extremes have been insane prior to central plan abandonment.

The Great Leap Forward, to this day the largest and most destructive central plan ever conceived and forced upon a population, took out 45 million people by starvation from 1958-1962. This was followed after only a brief 4 year respite by the Cultural Revolution of 1966-1976 during which another 30 million were wiped out. The total from both Big Plans is about a quarter of the entire population of the United States. This was only 40 years ago.

The point is not that this will happen again. I do not believe it will. The point is that crushing the VIP market and then adding insult to injury by moving in to crush the mass market through halving cash withdrawals is not even a drop in the bucket in terms of severity to which Beijing’s Communist Party has gone in the past to force its omnipotent plans. It’s barely even a single water molecule in the bucket. For a regime that has previously gone to such extremes as to inflict the worst economic atrocities in human history, limiting cash withdrawals is a puppet show. They can, and probably will, go much farther when they see whatever it is they want to accomplish isn’t working. Not to the point of purges and mass starvation as before, but much farther than (*fah!*) limiting cash withdrawals.

So what’s in store for Macau in 2017? A hint comes actually from the price of Bitcoin. Bitcoin in Chinese Yuan terms has risen 20% since December 8th, the date of the cash withdrawal limits. This chart from Zerohedge shows that much of the Bitcoin buying spree is coming from China. Check the Bitcoin/Yuan trading volume particularly beginning in late November. 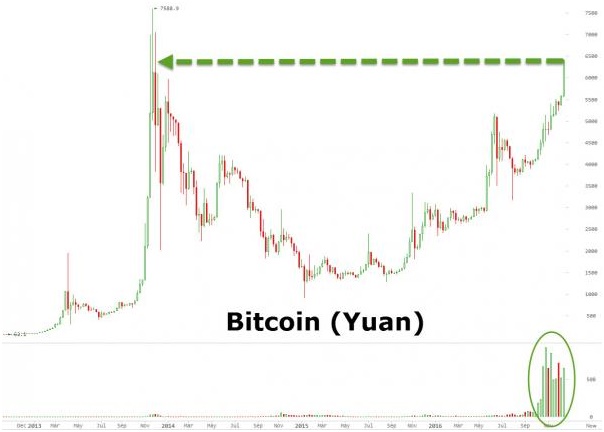 Did whoever started buying in November know about the coming withdrawal restrictions in advance?

Those who use Bitcoin even casually on a retail basis know how convenient it is maybe not necessarily for buying stuff with, but for transferring capital across borders. Once Bitcoin is in a wallet, it can be accessed anywhere. As long as the average Chinese person can buy bitcoin, he can move any amount of wealth anywhere in the world, limited only by the amount of Bitcoin he is allowed to buy.

The Yuan is down and falling. 2007-2010 support levels have been breached. Foreign exchange reserves in China have fallen 25% since 2014 to try to reverse the fall but it hasn’t worked. Why is the Yuan falling? Lots of reasons, but just intuitively speaking, if you were holding a currency that you were not allowed to transfer out of the country and you wanted to transfer it out of the country, you’d sell the currency for something you could transfer out of the country. So you sell Yuan and buy Bitcoin. That lowers the price of Yuan and raises the price of Bitcoin. It’s as simple as that. Capital controls are imagined by governments to strengthen their monopoly currency but the opposite is what always happens.

So what’s next? Bitcoin limits, which will probably pull Macau down even more.

And on the other side we have Donald Trump taking office in three weeks, who will probably put a tariff on Chinese goods in an executive order as one of the very first things he does in the White House just because. Beijing, already under siege in a monetary freefall and in a bad mood, will definitely respond and it won’t be pretty. Perhaps by attacking American casinos in Macau directly and accusing their executive staff of encouraging money laundering or some such thing.

Did I mention that China’s aircraft carrier is wandering around in the Pacific and South China Sea? Things are getting bellicose and pugnacious. The farther down the Yuan goes, the worse it’s going to get, and the less purchasing power the Chinese will have to gamble in Macau to boot.

2017 does not look to be friendly to China’s gambling superhub. 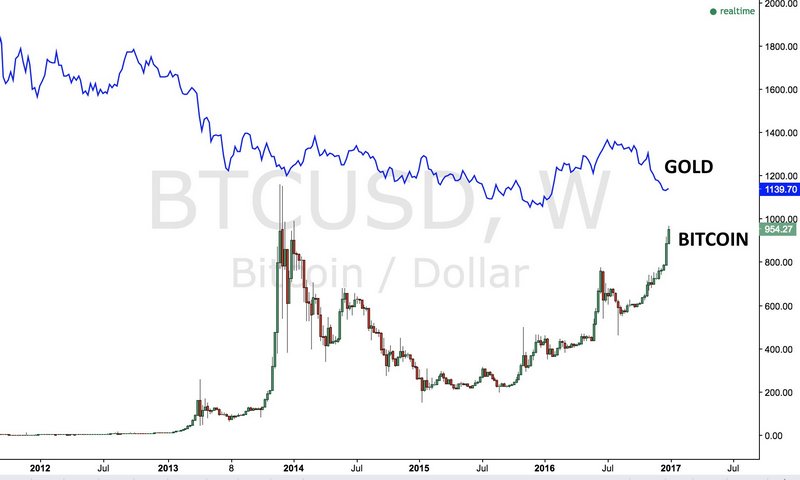