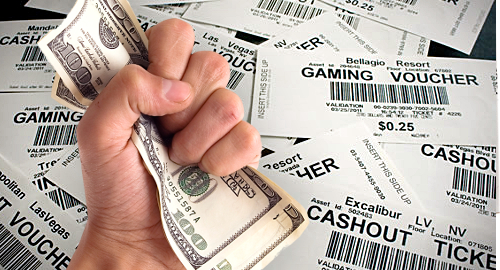 Nevada casinos and the state government are making a killing off unclaimed gambling winnings.

Ever since Nevada slots and video lottery terminals began issuing paper tickets instead of spitting out actual coins, gamblers have literally been leaving millions of dollars unclaimed. Some of these tickets are presumably lost or left behind in the machine by accident, while others are for minor amounts that the gamblers apparently feel isn’t worth the time or effort required to redeem the tickets at the casino cage.

According to figures compiled by the Las Vegas Sun, nearly $12m worth of winning tickets was left behind in fiscal 2016, with Las Vegas Strip casinos accounting for over $7m of that total.

Under a Nevada law passed in 2011, the tickets are only valid for a period of 180 days or a fixed date established by an individual casino, whichever is sooner. Three-quarters of the unclaimed vouchers are redirected into the state’s general fund, while the casinos keep the remaining 25%.

In the five years since that law was enacted, the state’s share of this unclaimed bounty has topped $35m. The law doesn’t require the state to break out how many tickets go unclaimed, nor specifics on the average worth of each unclaimed ticket or the largest value of any individual ticket.

The tickets are anonymous, but players who belong to loyalty or reward programs with major Vegas casino operators have some options for proving ownership of a lost ticket. Players who don’t belong to such programs have to rely on a casino’s willingness to scroll through endless hours of security video to make a connection.

The anonymity of the tickets also means that the $35m figure doesn’t include tickets that may be lost or left behind that are found by other gamblers, who go on to redeem them for cash with casino staff being none the wiser.

If nothing else, the unclaimed millions currently being trodden underfoot by Vegas visitors adds a new dimension to the classic Elton John song Goodbye Yellow Brick Road, in which the singer laments that he’s one of many “mongrels who ain’t got a penny, sniffing for tickets like you on the ground.” Then again, given Sir Elton’s legendary appetite for cocaine back in his 70s heyday, tickets were likely well down on his sniffing hierarchy.