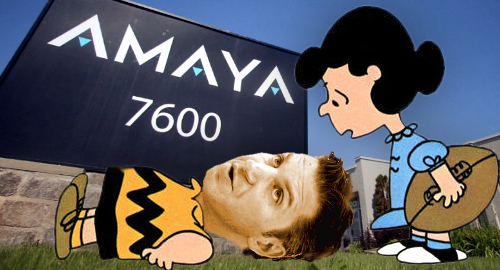 If Canada’s Amaya Gaming was a hockey team, commentators would say their season was ruined by ‘off-ice distractions.’ Despite Amaya’s flagship PokerStars brand making its triumphant return to US shores and continued progress in diversifying beyond its pure poker roots, Amaya headlines were dominated by allegations of illegal insider trading and fumbling attempts at acquisition and privatization.

Amaya CEO David Baazov stunned the markets in February by announcing plans to acquire the company and take it private. The following month, Quebec securities regulators filed criminal charges against Baazov, accusing him of running an illegal kickback scheme by providing advance info on Amaya deals to a group of individuals that included his brother Josh/Ofer and Craig Levett, the pair behind former scam betting site BetonUSA.

Following the allegations, Baazov took a leave of absence from Amaya before resigning as CEO in August, with Rafi Ashkenazi assuming the chief exec’s role. Amaya then had a public flirtation with UK bookmaker William Hill regarding an “all-share merger of equals,” but these plans came to nought after Hills’ shareholders expressed reservations.

Baazov then submitted an improved takeover bid, a proposal that turned seriocomic when one of his four financial backers claimed to have never heard of Amaya, while another of the four proved to be a phantom. Baazov later clarified that his bid was now supported by only two firms, neither of which had a history of billion-dollar investments. Inevitably, Baazov formally abandoned his bid last week due to the demands of “certain shareholders.”