How to Find the Best Slot Machine

Everyone who has ever played slots for at least five minutes seems to feel that they are qualified to find the best slot machine.

"Best" usually means the loosest slot, meaning that the slot machine game seems to pay out more coins than have been played, at least for a time period. There are as many theories as there are people on how to find this elusive machine.

Some people believe strictly in luck. If they were wearing their lucky hat the last time that they played and won, then they will ascribe their luck to this hat and be sure to wear it every time they play. Others like to talk to the slot machines while they play. Some folks like to test the temperature of the machine before they begin playing. If the machine is warmer than the other machines, then this qualifies the machine as a "hot" one, suitable for play. Some people will only insert cold coins into a machine, claiming that if warmer coins are used, the machine tightens up.

Many players believe that slots should be played only at night or on the weekends, or some other variation of timing. Still others believe that the rhythm used in pulling the handle is the secret. Implementation of this theory includes such variations as the short hard pull and the slow, almost delicate pull. Each has its adherents. Others use the "the attendant must know" theory and ask the slot attendant which is the best machine to play. A variation of this is to observe another slot machine when playing and if the machine has not paid a jackpot in a long time, to consider playing the machine as it should be ready to pay.

The location within the casino is also important for many players. Some players claim that aisle machines are the best, while others believe that the loosest slots are hidden in back corners so that they don't get much play.

We don't have much to say about the "luck" or clairvoyance theories of slot play. Perhaps some folks got it and some don't. We know that we don't do very well when we rely purely on luck.

Obviously, talking to the machine or even caressing it, is not likely to have any effect on a computer chip controlled mechanism. Neither is the temperature of the machine (which is probably most affected by the temperature around it) nor the warmth of the coins. Slot machine levers have zero influence on the random number generating chip controlled machines. The machines could just as easily be activated by a button (as are the video slots) or a pull string. The days of handles activating gears which determined the rate of spin of the reels are long gone.

All of these theories may occasionally win some money for their adherents, but consider: Randomly selecting any machine may work just as well.

We are after something a little more definitive. Let's look first at some of the characteristics of the different types of slot machine s.

One of the attributes we will look for on any machine games is the ability to play from one to as many as five coins without any penalty for playing less than the maximum number of coins. Why? Because we want the flexibility to adjust the size of each wager dependent upon the exact playing conditions we are facing at that exact moment.

This condition knocks out of contention any single coin slot machines. With a single coin slot, the only option we have is to insert a coin and pull the lever. It is a win or lose proposition, with no alternatives other than changing machines. To have the best chance of winning, we will demand the flexibility to vary the number of coins based on each individual machine's attributes.

With this one condition, we will rule out play on any of the single coin mechanical machines. This restriction is not too severe, as these machines can only be found in a few downtown casinos in Las Vegas, and scattered about other Nevada sites.

Less obviously, but using the same logic, we will reject playing on the Multiple Pay Line machines, which accomplish the same thing as the Option machines by bringing additional pay lines into play as additional coins are inserted.

A second condition we will impose is that the machine we select to play is a High Frequency machine. By high frequency, we mean that the machine has been programmed to pay off many lower payoffs more frequently rather than a very small number of higher payoffs. 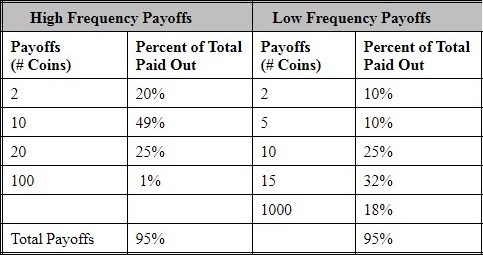 If we look at the payoff schedules on these two machines, we don't have much of a clue as to which is the higher or lower frequency machine. Both machines have similar payoffs, and both machines will ultimately pay back 95% of the coins played. Having the benefit of using this table, we can see that the high frequency payer will return a higher percentage of the coins played on the payoffs of 20 coins or less. If we add the payoff percentages for all payoffs of 20 coins or less on the high and low payoff machines, we find that 94% of the payoffs on the high frequency version are for payoffs of 2, 10 or 20 coins, while only 77% of the low frequency machine payoffs are for 2, 5, 10 and 15 coin payoffs.

For our purposes, the machine paying 94% of its payoffs on payoffs ranging from 2 to 20 coins is the better machine, as it is more likely that we will hit one or more of these payoffs in short-term play. While the lower frequency machine returns exactly the same overall payback of 95%, it accomplishes this by making fewer lower coin payouts and concentrating a higher amount of its payback in the less frequently hit jackpot payoff of 1,000 coins.

In short-term play, we are not likely to ever hit the jackpot payoff. Since 18% of the slot's overall payback is represented by this jackpot, in simple terms, by not hitting the jackpot, our return will be reduced by 18%, a large percentage of the expected payback.

Another aspect of finding the best slot machine is picking the best casino in the best location. Unfortunately, casinos are not very forthright on their exact hold percentages so that this task is not always that easy.

We can, however, refine our selection process somewhat without knowing the exact hold percentage of each real money casino.

First, we know that we should confine our play to casinos. Grocery stores, service stations, bars, airports and other non casino locations often have paybacks of from 50% to 75%. Your money will disappear very quickly if you decide to regularly play the slots at Joe's All-Nite Market. Needless to say, you should stick with legal slot machines. If you decide to play illegal slots, who knows what extortion will be enacted on you. And you will have little recourse if you are cheated.

We refined the terms "loose and tight" to include three categories of machines: