The Fibonacci roulette betting system is based on the prominent mathematical sequence, which dates back to the 12th century and is linked to the work of Leonardo Bonacci (1170 – 1250). In 1202 the Italian mathematician published his Liber Abaci (The Book of Calculation), in which he introduced the Fibonacci number sequence. In the following centuries gamblers of live casino began basing their winning casino strategies on this sequence, while it is still a preferable playing method even today.

However, if you are further along the sequence after a number of back to back losses, you simply cross off the last two numbers in the sequence, and carry on from the number you are left with. The system ends when all the numbers are crossed out, and you finish with more money than you started with.

The sequence is designed by starting with 1 and by adding the two prior numbers together. Thus, the first 15 numbers in the sequence will be as follows:

Using the Fibonacci sequence in Roulette

It is important to note that the number sequence is appropriate to be used when placing even-money outside bets (red/black, even/odd, high numbers/low numbers). The betting process begins with 1 (1 unit) as a first wager. Then, the player moves through the sequence, in case he/she registers losses. Or, every time he/she loses, he/she needs to move to the next number in the sequence. When a win occurs, the player needs to take a step back to the beginning of the sequence. In case the first bet turns out to be a winner, the player will simply begin the sequence once again.

The further the player goes through the sequence, the greater his/her losses will be. A win on the first bet is considered as the best scenario, while a win on the second or the third bet will lead the player to breakeven.

Some people may say that if that is all, the system is not worth even a try. However, that is a bit premature conclusion! Let us see how a Fibonacci-based betting process may look like:

A win has finally occurred on the 10th bet. What the player needs to do next is to move two numbers back in the Fibonacci sequence and place the respective number as the 11th bet. Thus, he/she will next bet 21 units. This step is to be repeated again and again until the player reaches the beginning of the sequence. So, after each win, he/she needs to move two numbers back, while after each loss, he/she needs to move one number forward. Now, let us extend the above mentioned betting process: 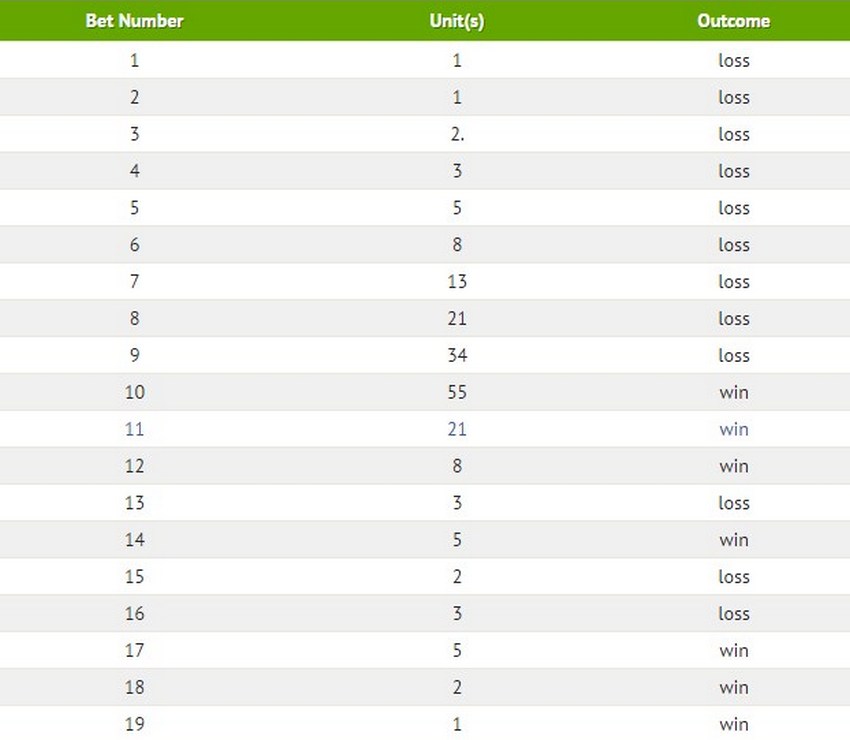 It became evident that the player reached the very beginning of the number sequence and scored a profit of 1 unit, despite the fact there have been 12 losses and only 7 wins.

However, there might have been a quite different scenario, with a far greater number of losses. In such a case, the player might need a longer period of time to return to the beginning of the sequence and of course, he/she might need to be extremely precise following the rules of this system. A mistake somewhere in the betting sequence would surely cost him/her a lot.

Limiting the losses is critical

We should note that, as all other betting systems in roulette, the Fibonacci is not secured against long losing streaks. A considerable string of losses in favor of the real money casino may lead to financial ruin, thus, a player needs to set a stop loss limit. We must decide by how many missed spins can be bet. Some gambling of casino experts recommend going no further than 6-7 steps.

The Fibonacci betting system for roulette may fit the preferences of those players who tolerate medium risk (players striving to profit consistently, but, on the other hand, feeling comfortable with a moderate-sized loss).